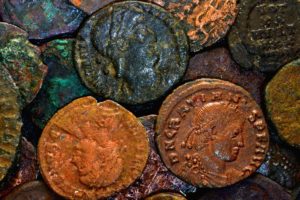 The history of coins, which is a fascinating and complicated tale, goes back thousands of years, practically speaking all the way to the discovery of metals and their value by the early human civilizations. Before the concept of money and currency have emerged, people were generally either farmers or hunter-gatherers, and their economies consisted of local exchanges of goods, i.e. barter (”I’ll give you some of my mammoth meat, if you give me one of those nicely carved stone weapons”–that kind of stuff). But people soon discovered that it is very useful to have a common local currency that everyone sees as valuable, and to which a relatively common value can be assigned.

Thus, coins made of different kinds of metals and metal alloys appeared, minted and used locally and regionally, and with the expansion of trade across cultures, the coins of different types could be assigned different values and they could be exchanged for foreign coins if need be. Some of the most prominent examples of Antiquity include ancient Greek coins, as well as ancient Roman coins, which were often quite elaborately carved, had inscriptions and pictures of Caesars on them, etc.

Even the invention of paper money–first in China in the 7th century A. D., and spread to Europe in the early days of modernity ten centuries later–did not displace the use of metal coins as currency, and today, virtually every modern economy’s currency includes both banknotes, i.e. paper money, as well as coin denominations.